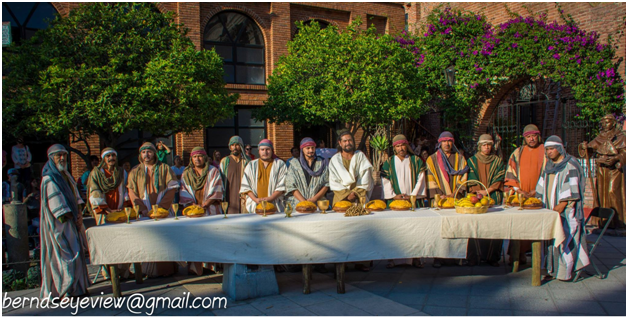 Lent is the period of forty days between Ash Wednesday and Easter Sunday. The word for Lent in Spanish is Cuaresma, which comes from the word cuarenta, meaning forty, because Lent lasts for forty days (plus six Sundays which are not counted). For Christians, this is traditionally a time of sobriety and abstinence meant to correspond to the time Jesus spent in the wilderness.

The dates of Lent for the coming years are:

The first day of Lent is Ash Wednesday. On this day, the faithful go to church for mass and afterwards people line up to have the priest draw the sign of the cross in ashes on their forehead.

Many people give up something they 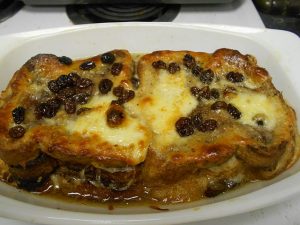 enjoy during Lent and in Mexico it is traditional to abstain from eating meat on Friday during Lent.  One of the many special dishes popular during Lent is a dessert called capirotada, which is a Mexican bread pudding that usually consists of toasted French bread, cheese, milk, butter, peanuts and raisins and is soaked in syrup that includes water, brown sugar, cinnamon and a variety of other ingredients.  The ingredients in capirotada are believed to represent the suffering of Christ on the cross (the bread symbolizes his body, the syrup is his blood, the cloves are the nails on the cross, and the melted cheese represents the shroud.)

Read more about Mexican Food for Lent from the blog Mexico Cooks. 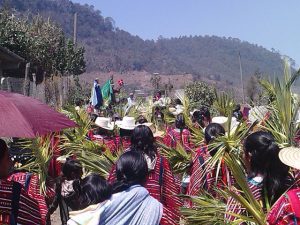 Processions and passion plays take place all through the country, and Ajijic is no exception, with an elaborate passion play that the community takes weeks to prepare.  Some of the other big Holy Week celebrations are in Taxco, Patzcuaro, Oaxaca and San Cristobal de las Casas.

Jesus’ final days are evoked in the rituals that take place during Holy Week beginning with Palm Sunday. 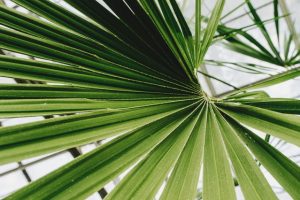 On the Sunday prior to Easter, known as Palm Sunday, the arrival of Jesus in Jerusalem is commemorated. According to the Bible Jesus rode into Jerusalem on a donkey and the people in the streets laid down palm branches in his path. In many towns and villages in Mexico on this day there are processions reenacting Jesus’ triumphal entry.   On this day all over Mexico, weavers of elaborately woven palms ply their craft outside churches, and worshippers follow the priest into church carrying the woven fronds (in the shape of crosses and other figures) or a simple palm leaf. When dry, the palm leaves are burned, and according to popular legend, the smoke carries the household’s prayers to the sky. One interesting tradition observed in some churches is that ashes from some of the blessed palms are reserved by the church for marking the sign of the cross on the foreheads of communicants during Ash Wednesday services the following year.

The Thursday of Holy Week is known as Maundy Thursday or Holy Thursday. This day commemorates the washing of the feet of the apostles, the Last Supper and Jesus’ arrest in Gethsemane.  On Maundy Thursday the “washing of the feet” ceremony is sometimes celebrated where during Mass, the highest ranking priest washes the feet of twelve common people in representation of the 12 apostles.  In cathedrals throughout the country, the bishops celebrate special masses during which the Chrism, a sacred oil used in the sacraments, is consecrated. In the evening many churches hold some type of re-enactment of the Last Supper.

Good Friday recalls the crucifixion of Christ. On this day there are solemn religious processions in which statues of Christ and the Virgin Mary are carried through town. Often the participants of these processions dress in costumes to evoke the time of Jesus. Passion plays, dramatic recreations of the crucifixion of Christ, are presented in many communities.  This may be an all-day event involving a cast of hundreds of amateur performers playing key roles in the Biblical story that reaches its climax with a simulated crucifixion. In other places there may be some type of solemn procession in which most of the populace participates as penitents. In addition, the Virgin Mary´s pain and suffering at the loss of her son may be recalled with the display of an Altar de Dolores–an Altar of Sorrows.

In some places there is a custom of burning Judas in effigy because of his betrayal of Jesus. Cardboard or paper mache figures are constructed, sometimes with firecrackers attached, and then burned. Often the Judas figures are made to look like Satan, but sometimes they are made to resemble political figures.

This is generally a day when people go to Mass and celebrate quietly with their families.  The church bells will once again peal, now with especially joyous fervor. With church attendance at a high, you can also expect to see plenty of festive crowds bustling about every town plaza following the services, including the ever-present street vendors selling everything from tacos to ice cream to trinkets.

One of the joys in living in Mexico is the appreciation of the richness of the culture and traditions. We hope that those living at Lake Chapala take in some of the many elaborate ceremonies and festivities – and if you don’t live here, better put it on your bucket list!