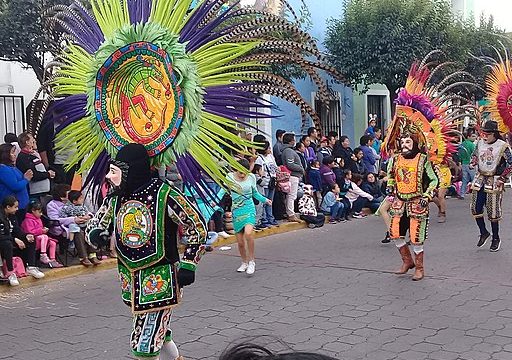 Carnival is celebrated in almost all Catholic countries as the final festivity before the commencement of Lent.  At Lakeside we are in full Carnaval season with a series of events including the Sayaca parade in Ajijic on February 25 beginning at 10:30, starting from behind the church.  The Sayacos are a pre-hispanic tradition native to Ajijic and there are several versions of the legend about their origins that have been passed down orally from one generation to another.

The Legend of the Sayacos 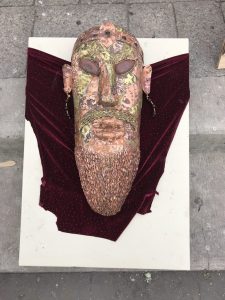 One version of this ancient tradition says that the Sayaco and the Sayaca were born prior to the arrival of the Spaniards when Ajijic consisted of three capullis (something akin to villages) consisting of Tomatlán (La Canacinta); Tecoluta (Six Corners) and Axixique (Ajijic).  The sayacos were twins who were born with a syndrome that caused them to salivate constantly.  For this reason they were called called xayacatl (mask or face that produces water).

The father of the Sayacos was a shaman and one year after their birth he had a daughter named Tzicanzi, which in Náhuatl means “one who observes nature.”  She was noted for her beauty, sweetness and intelligence.

Tzicanzi ‘s mother died during childbirth and one year later her father died of grief.  Afterwards, the twins and the daughter were raised by nursemaids from Tomatlán.  As they grew, the Sayacos began to gather corn and wild marigolds which they inserted into hand painted turkey eggs covered with a bark paper called in Náhuatl “papaquilisti”, which means “give the best that you have.”

The children grew until the sayaca (female twin) began to chase boys and try to kiss them, but they ran from her, which made her so mad that she threw ground corn at them and from this came today’s tradition of throwing flour during carnaval.

The sayaco (male twin) was more innocent and he liked to play with the marigold petals throwing them on people’s heads, and this later became the confetti thrown during carnaval.

The sayacos were very loved in the capulli (village) and they always led the most important rituals  with dancing and antics.  They laid out marigolds with ground roasted corn as an offering to nature, to keep away the hail and to ask for a good harvest.

When the Spanish arrived Tzicanzi was about 13 or 14 and the sayacos received them at the china stone, located at the west end of the villages, throwing marigold petals on their heads as a blessing.  Shortly after the arrival of the Spanish, the Sayacos died, but the tradition continued.

Tzicanzi continued to be very loved due to her ability to cure diseases, and despite many suitors, she maintained her focus on observing and learning from nature.    When she became elderly and could no longer gather herbs in the mountains, the people brought her ingredients to make medicines.

Over the passage of time, the tradition of the sayacos changed and they began to wear Spanish clothing and the pre-hispanic masks of the gods became the masks of Spanish gods, which they adopted to make fun of the Spanish and their customs once a year.  Now, the sayacas flirted with men.  The sayaco danced and playfully spanked the women, and mocked the Spanish woman imitating her in a lewd manner.  The Sayacos mocked those in power including the hacendados (Mexicans of Spanish descent) and politicians.

Over time the sayacos became part of the San Sebastian festival and a lead sayaca was in charge of throwing confetti and wearing typical clothes from the folklore ballet of Guadalajara.  The mask was made of mesquite, copal or other easily available types of wood.  Today there are almost no European looking masks and they are made of paper mâché and plaster.  Some people today even use Halloween masks and they don’t wear the traditional clothing.

Translated by Bette Brazel from an article by Eduardo Ramos published in La Laguna, February 17, 2018

Focus On Mexico offers 6-Day Educational Programs to Ajijic and Lake Chapala, Mexico. Join us and learn why thousands of Americans and Canadians chose to retire in Mexico.Our programs offer the perfect balance; a wonderful vacation and an insightful, educational experience. Our expert speakers cover all topics: Health Care, Real Estate, Legal System, Safety, Immigration, Assisted Living/Care Options, Bringing Pets, Cost of Living, US Taxes for Americans, Non-Residency for Canadians, Living on the Lakeside, Investing in Mexico, Mexican Economy and much more…