Over a year ago we reported on the construction of two new hospitals in the Lakeside area, a first for Lakeside, where in the past all hospitalization cases were referred to Guadalajara, a 45 minute to one hour journey, depending on traffic.  The new private  Hospital San Antonio del Lago de Chapala officially opened for business on April 26, 2019 and one of our recent FOCUS alumni became its 4th admitted patient after a sudden health emergency.  He has graciously agreed to share his story with us for the benefit of other expats wondering about the quality of medical care in Mexico.

Jorge’s wife, Danette reports that, hearing some noises around 1 a.m., she got up to find her husband slumped over in a chair convulsing.  Her quick thinking helped to save his life as she rushed next door to rouse the complex manager, who helped her get him into the car.  As a newly arrived expat, she had no idea where to go, but the helpful manager said, “We’ll take him to the clinic.”  At that moment she had no idea where they were going but followed him to the newly opened hospital which, fortunately is only five minutes away from their home.  Danette reports that as they approached the hospital on the highway around 1:30 a.m. she could already see people running out to meet them.  As soon as the car came to a halt, an orderly lifted her husband out of the car, got him into a wheelchair and wheeled him into the emergency room.  After quickly taking his vitals and asking a few basic questions, the on-call doctor, who arrived immediately, and his staff got to work without asking any questions about insurance, payment, etc.  They quickly concluded that Jorge had suffered a diabetic seizure when his glucose levels dropped to 22, a definite life threatening emergency, and the lowest the emergency room physician had ever seen.

Danette says that although she was terribly concerned for her husband, as soon as he was in the hands of the hospital she began to relax, knowing Jorge was being well cared for.   Only when Jorge’s care was well underway was Danette presented with a brief form to complete containing about ten questions.  Jorge reports that all the staff seemed more focused on caring for him than taking care of the paperwork. 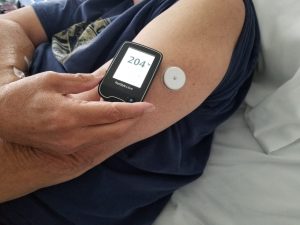 Within an hour Jorge was stabilized and admitted as a patient.  His room was quite comfortable hotel quality with a view of the golf course, a recliner and a deep couch to accommodate someone staying with the patient.  The hospital provided a blanket and pillow for Danette.  During the night Jorge’s glucose levels were tested every 30 minutes and at 8:00 a.m. the emergency room doctor and the attending physician arrived together and Jorge was fitted with a state-of-the-art glucose monitor.   Jorge notes that his U.S. doctor had never discussed that option and he was still using the uncomfortable finger-pricking method for testing.  He ruefully admits that he was not testing his glucose as frequently as recommended because it seemed that the numbers were always the same and he wanted to avoid the discomfort. 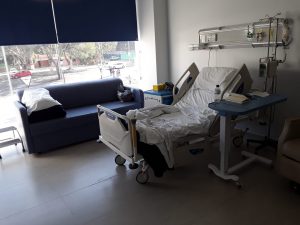 As the hospital kitchen was not yet operational, Jorge was presented with a menu from a nearby restaurant for his meals, and reports that the food quality was excellent.  Danette reports that there were always at least three nurses on duty with at least one English speaker and that the nurses were very competent, caring and available for all patient needs.  She says she stayed with her husband more for his comfort than for any real need for her to be there.

After studying his case the attending physician concluded that one source of the problem was that Jorge was prescribed too high dosages of insulin and he immediately took him off of insulin.  Jorge reports that for the first time in years he is sleeping through the night and is feeling better overall than he has in years.

Jorge and Danette both report that the doctors each of them have visited in Mexico indicated that they were taking too many medications and started them on a program to reduce or eliminate their medications.  They also report that some Mexican doctors they have visited are using more naturopathic/homeopathic remedies rather than strictly pharmaceutical prescriptions.

So How Much Did It Cost? 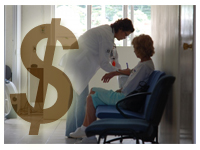 Jorge says, “I can’t believe that one day after almost losing my life, I walked out of the hospital, and I’m eternally grateful to my wife and the complex manager for their quick action, and to the doctors and nurses who attended to me so quickly and efficiently.” 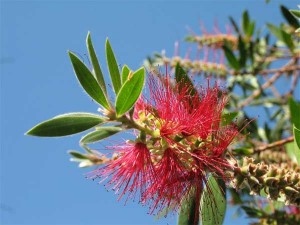 Jorge reports that it’s surprising how available the doctors are for follow-up care.  They answer their phones and are generally directly available to their patients.  For expats wondering about the quality of medical care in Mexico, Jorge says, “Don’t believe the press or people who seem to know but have never lived in Mexico.  The quality of care is excellent.  Doctors spend time with their patients and they are focused on treating the problem and are generally conservative when prescribing medication.  We think the quality of medical care in Mexico is superior to the U.S.”

Thank you Jorge and Danette for sharing your personal story with us!

Focus On Mexico offers 6-Day Educational Programs to Ajijic and Lake Chapala, Mexico. Join us and learn why thousands of Americans and Canadians chose to retire in Mexico. Our programs offer the perfect balance; a wonderful vacation and an insightful, educational experience. Our expert speakers cover all topics: Health Care, Real Estate, Legal System, Safety, Immigration, Assisted Living/Care Options, Bringing Pets, Cost of Living, US Taxes for Americans, Non-L for Canadians, Living on the Lakeside, Investing in Mexico, Mexican Economy and much more…