Christmas in Mexico is similar yet different from the U.S. depending on what part of the country you live in.  Large cities such as Guadalajara tend to have a similar U.S. like frenzied shopping atmosphere, but Christmas in smaller towns and villages is quite distinct.  There is much less emphasis on gifts and more emphasis on the family celebrations and traditions surrounding Christmas.  I took an informal poll of my ESL students to see what family gifts they were giving for Christmas and was charmed with the simple answers – a bottle of cologne, a shirt, a pair of shoes, a necklace, etc.  – reminiscent of the U.S. years ago.  Most of them also indicated that they buy their presents right before December 24, making the last days of the run-up to Christmas a good time to avoid shopping!  While the Christmas decorations are up and there is a definite uptick in traffic and foot traffic in stores, there is a notable absence of holiday frenzy in the village. 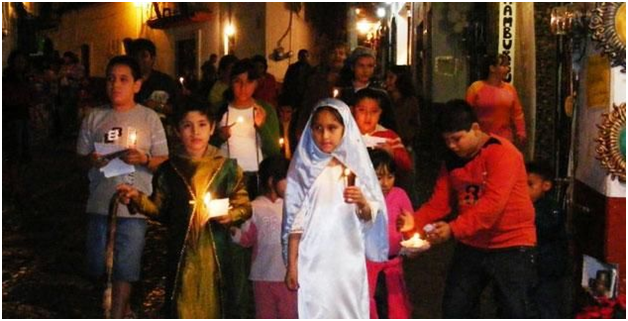 Mexican Christmas celebrations begin on December 16 with posadas commemorating Mary and Joseph’s search for a place for their child to be born.  The neighborhood processions composed of children and adults and often featuring Mary and Joseph riding on donkeys go to various houses asking for shelter and are turned away until they reach the one pre-arranged house that accepts them and provides a party with food, drinks, and piñatas.

Today, there are also many variations on the posada for adults and children, which are basically Christmas parties. 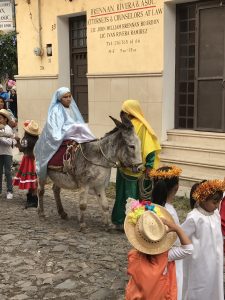 At Lakeside, expats are welcome to join in the processions and it’s great fun to sing along with the piñata song as children take turns hitting it blindfolded with various accommodations made by the adults depending on the age/height of the child. Each child’s turn lasts as long as it takes to sing the piñata song.

Because if you miss it, you’ll lose your way.

Now you’ve hit it once,

And your time is up. 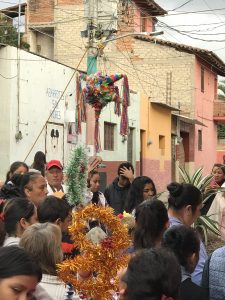 Although today piñatas come in all shapes and sizes, the traditional piñata has seven cones representing the seven deadly sins: envy, sloth, gluttony, greed, lust, anger/wrath and pride.  The stick used to break the piñata represents love destroying the seven deadly sins, and the candies and treats that pour out of the broken piñata symbolize the forgiveness of sins and a new beginning.

Like many Mexican traditions, this ceremony is a combination of ancient Aztec and Catholic traditions.  The Aztecs celebrated the birthday of the Aztec god of war with a clay pot on a decorated pole filled with tiny treasures and the treasures falling out symbolized an offering to the god.  The Catholic church cleverly adapted this ceremony to fit Christian traditions.

Mexican Christmas is celebrated on December 24, usually with a large dinner at midnight and stores close early on December 24.  December 25 is not a holiday and many restaurants are open and happy to serve Lakeside expats who want a traditional Christmas dinner in the afternoon or evening of December 25. 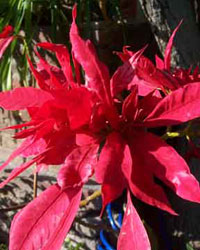 Happy Holidays to all of our friends from Focus on Mexico and we look forward to seeing you soon!  Whether north of the border or Lakeside we wish you the peace of the season and renewed joy for the coming year.

Focus On Mexico offers 6-Day Educational Programs to Ajijic and Lake Chapala, Mexico. Join us and learn why thousands of Americans and Canadians chose to retire in Lake Chapala. Our programs offer the perfect balance; a wonderful vacation and an insightful, educational experience. Our expert speakers cover all topics: Health Care, Real Estate, Legal System, Safety, Immigration, Assisted Living/Care Options, Bringing Pets, Cost of Living, US Taxes for Americans, Non-Residency for Canadians, Living on the Lakeside, Investing in Mexico, Mexican Economy and much more…