September 16 is the official celebration of Mexican independence, a big holiday in Mexico similar to the 4th of July in the U.S. and Canada Day.

The “Grito de Dolores” is a historic event that happened on September 16, 1810, when the priest Miguel Hidalgo rang the bell of his church and issued a call to arms to fight Spanish occupation in the small Guanajuato province town of Dolores (now Dolores Hidalgo).  Each year the ‘grito’ is reenacted in villages and towns throughout Mexico, led by the ‘grito’ issued by the President of Mexico from the balcony of presidential palace in Mexico City. 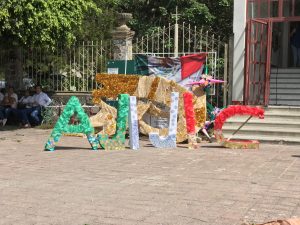 Ajijic celebrates with a robust independence program, beginning on September 15 with a late afternoon series of kids’ contests including a greased pole, a comal (a clay plate used to prepare tortillas) contest with coins stuck to it.  Kids have to grab the coins with their teeth only.  There is an apple eating contest that consists of apples tied to a string and the first one to eat the apple gets the prize (think apple bobbing without water), followed by a chile (not chili like meat/beans but hot chiles) eating contest that draws mostly teenage boys who are unconcerned about destroying their stomaches, except for Flavio, the famous local ambulatory ice cream vendor, who somehow participated in all of the eating/drinking contests and then calmly went back to selling ice cream! 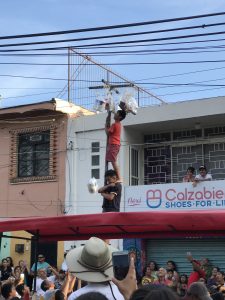 The greased pole is probably something that couldn’t happen in the U.S. today with mainly pre-teen boys scrambling up the pole on each other’s necks, backs and shoulders to get the prizes, which consist of things like paper towels, bouncy balls, boxes of cereal, etc.  It’s not about the prize, it’s about proving your manhood!

Recently one of our well-known local Mexican artists commented that Ajijic has been a bicultural town since WWII, which is true, since many returning GIs settled in the area.  The fact that this is a bicultural community comes alive watching the kids’ games organized and emceed by Lee Hopper, who first started coming to Lakeside in 1960 at age 9, and speaks perfect English and Spanish.  He provides a rousing commentary in both languages with interesting asides about the history of Ajijic.  In 1960 there were only two telephones in Ajijic, one in the church and one in the municipal offices, and you could buy a house for $7,000!

Kids’ games are followed by adult games including a torta (large baguette sandwich) eating contest, and beer/tequila drinking contests.  Once all the contests are over, the mariachi band takes over featuring talented local singers, followed by folkloric dance.  Then finally it’s time for the grito, when the town administrator (sort of like a mayor with more responsibility and less funds) comes out and reads the grito, not leaving out the names of each person who signed the 1810 call to arms.  The administrator is accompanied by his family and the newly crowned Queen of the annual patron saint festival in November with her princesses.  There is a flag ceremony and the national anthem, followed by fireworks, and then serious dance music for those who have managed to last long enough.

The whole thing is a big family event and the plaza is packed shoulder to shoulder with vendors arrayed around the plaza selling every type of hot dog, hamburger, taco, grilled corn, cooked vegetable salad and my favorite, fabulous homemade pie.  The lemon meringue pie may be better than my mother used to make!  Kids of all ages stay up for the whole thing and the parents let them run wild around the plaza, which is perfectly safe. 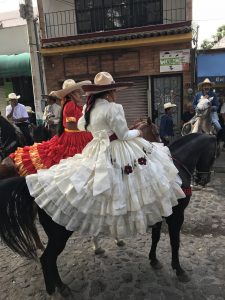 All of this happens on the eve of Independence Day, followed by more ceremony the following day with school and horse parades, a special mass, etc.  Once the ceremonies are over, the plaza is again filled with party goers who are still not tired.  The kids dominate with confetti filled eggs and spray foam that they delight in spreading as far and wide and on each other as possible.

This is party season, so come on down and join us for one of our intensive learning seminars and enjoy the local happenings while you’re here.