Day of the Dead on November 1-2 is one of the most important holidays in Mexico.  It’s a wonderful opportunity to see life and death through the eyes of the Mexican culture as you visit the altars set up all around Lakeside to honor ancestors who have passed and their return to visit their living loved ones on this holiday. If you are interested in a possible move to Lakeside, our October 27-Nov. 1 fast track learning seminar is the perfect opportunity to explore what Lakeside has to offer and the Day of the Dead celebrations.

Day of the Dead Lakeside 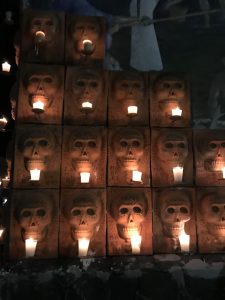 In Ajijic, the altars are displayed on the plaza and all around town. Once night falls on November 2,  Efren Gonzalez, a noted Ajijc artist, hosts a candle lighting ceremony at the skull mural in front of the town’s main church, followed by music and dancing.

In downtown Chapala, the city hall building opens its doors to the public where residents set up their own altars, and on Cinco de Mayo street many families will have an elaborate altar on display on November 2.

History of Day of the Dead

This intersection between life and death is never more evident than on Dia de los Muertos (Day of the Dead), a holiday that can be traced back to various indigenous groups, including the Olmec, Zapotec, Mixtec, Mexican, Aztec, Maya, P’urhépecha, and Totonac. Rituals celebrating the deaths of ancestors have been observed by these civilizations for as long as 2500–3000 years. Aztec rituals honored Mictecacihuatl, pronounced [mik.teː.ka.ˈsí.waːt͡ɬ] (literally “Lady of the Dead” corresponding to the current day Catrinas) Queen of Mictlan, the underworld, who ruled over the afterlife with Mictlantecuhtli, another deity who was her husband.

Day of the Dead Traditions 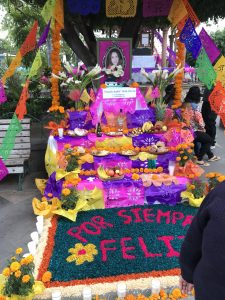 According to tradition at midnight on October 31, the gates of heaven are opened and the spirits of all deceased children (angelitos) are reunited with their families for 24 hours. On November 1, the deceased adults return to visit their families. The families invest heavily in this event, sometimes as much as two months earnings, to prepare the altar, decorate the gravesite and provide the favorite food and drink offerings to the spirits, who return tired from their long journey from the afterlife. The altars have soap, water and towels for the deceased to clean up after their long journey. Toys, soda, candies for the “angelitos” and on Nov. 2 cigarettes and various forms of alcohol are set out for the adults. On Nov. 2, the celebration moves to the cemetery where families gather at the gravesite of their loved one to reminisce and tell stories about those who have passed on. Tradition says that the winds pick up as the dead return. 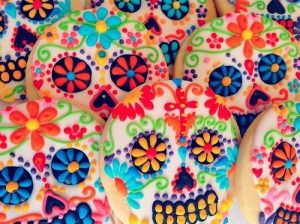 Sugar skulls became part of Dia de los Muertos in the 18th century when the priests taught the indigenous how to make sugar art for Christian religious observances.  The indigenous quickly adapted this skill to make sugar skulls, the best of which are still handcrafted by local artisans. Traditionally the name of the departed loved one is engraved on the forehead and placed on the home altar to honor the return of the family member.

Marigolds or “flor del muerto”, whose scent is believed to attract the souls and draw them back to earth, are also a significant symbol of Dia de los Muertos. 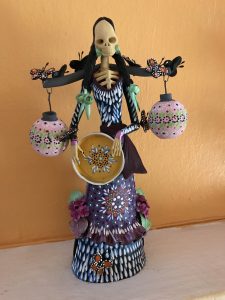 No discussion of Dia de los Muertos is complete without a reference to the popular “catrinas”. The Catrina originated with Jose Guadalupe Posada, considered the father of Mexican printmaking. After moving to Mexico City in 1888, he became famous for calaveras (skulls or skeletons) images that he wielded as political and social satire. Porforio Diaz, President of Mexico from 1876 to 1911, was fascinated with all things European and his wife was always outfitted in the latest European fashions.  While he modernized Mexico in many ways, his regime was corrupt and repressive, and just as today political satire was an effective form of protest. Posada took his image from the legend of Mictecacihuatl and it was basically a headshot of a skeleton with an elegant hat. Diego Rivera took it to another level with his portrayal of a full length figure in an elegant dress in his 50-foot mural, Sueño de una tarde dominical en la Alameda Central (“Dream of a Sunday Afternoon in Alameda Park”), with Catrina holding the 10-year-old Rivera’s hand while Frida Kahlo in traditional Mexican dress stands behind them with Posada standing to Catrina’s left, offering her his arm, one of  many layers of symbolism in this famous mural. It wasn’t long before the Catrina began to be associated with Dia de los Muertos and today the Catrina symbolism is alive and well throughout Mexico. 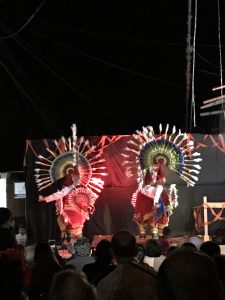 The whole tone of Dia de los Muertos is one of celebration, honor and respect for those who have passed, for the belief is that death is not the end of life, but the continuation of life in a parallel world. Rather than a somber and austere event, it is more like a big party that brings alive the truth that death is part of life and as certainly as we are all born, we will all die, part of the natural progression of events.

The movie ‘COCO’ is a good representation of the Day of the Dead ceremonies and the real Mama Coco character, Maria de la Salud, is 105 and still receives visitors from around the world in her small village of Santa Fe de la Laguna near Patzcuaro.

Sign up now for our October 27 – November 1, 2019 fast track learning seminar and enjoy the Day of the Dead celebrations and if you can’t make it on those dates, there are still openings for our November 24-29 program.  Looking forward to celebrating life and death with you Lakeside!