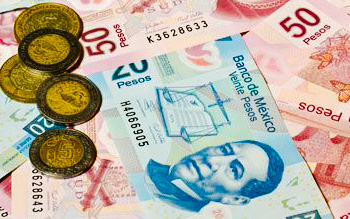 The first time I ever laid eyes on Mexican money I said, “Oh look! It’s like Monopoly money!” I can assure you, while it is pretty, it spends just like real money!

If you’re not used to dealing in more than one currency, it can feel daunting at first to convert from your home currency to pesos quickly and confidently. I’ve seen many flustered people thrust a handful of cash and coins at cashiers in Mexico so that vendors could pick out the appropriate amount from their hands. That’s NOT the recommended way of doing things, even though there are many honest people in Mexico, just like anywhere, it is far better for you to be savvy. With just a few minutes of practice you’ll be spending dinero (or saving it) like a seasoned expat.

The official currency of Mexico is the Mexican Peso. Like dollars, each peso represented by the $ sign is worth 100 centavos, or cents. You may also see Mexican pesos expressed as MN (Monedas Nacional), as in 100MN. Cents are represented by the symbol “¢”. Mexican peso coins are round and the 1, 2 and 5 coins have a golden/bronze center circle with a picture of the Mexican Coat of Arms (Eagle) in the middle with the outside surrounding being of silver color. ( Canadians will see that the larger coins look somewhat like the Canadian loonie).

Americans and Canadians have more spending power than they have had in recent years past in Mexico. As of this publication (September of 2017) The exchange rate for an American is about $17 MXN= $1 USD. For Canadians, the exchange rate is about $14.5 =$1 CAD.  As a “free floating” currency on the Foreign Exchange Markets, the Mexican Peso may, like similar currencies in other countries, can fluctuate daily. So you will very quickly become familiar with currency exchange rates. XE has a website as well as an app you can download on your smartphone to help make this easier when you need to make the conversion quickly. Universal Currency Converter – http://www.xe.com/.

The Mexican peso bills are printed in denominations of 20, 50, 100, 200, 500 and 1000 notes. Mexican currency is made of plastic and can tear easily so be careful not to wash it or crease it. This new plastic composite has made it very difficult for would-be counterfeiters to replicate. In the past, it was quite common for very industrious criminals to pass off fake bills as authentic to gullible travelers who would be caught unawares with worthless bills.

I will caution you that it may be difficult to change the $500 and $1000 peso notes. Always carry small bills and change with you. It is much easier on the small tiendas. When you give them big bills, it takes all their cash (and maybe some of the next store’s) to give you change. Try and get your bigger bills cashed at the bigger stores or banks and have small change on hand for the local tiendas, street vendors, buses and taxis. The bills are in different colors and easy to differentiate. In most stores, you will find prices in pesos. However, be careful if you are in the cities and especially the touristy areas on the coast – occasionally they price in U.S. dollars.

With a little time and practice you’ll be comfortable handling pesos and understanding the values of things rather quickly!